OFFICE OF THE ADMINISTRATOR

In order to fill this vacancy, with the concurrence of Levy Court Leadership, I contacted former Row Office Attorney Craig T. Eliassen, Esquire to inquire about his availability and interest into returning to the post he held from 1995 through 1999. I am pleased to report that Mr. Eliassen has expressed that he would be very interest and available to resume the post of Row Office Attorney effective upon the appointment of Levy Court.

Should Levy Court wish to appoint Mr. Eliassen to the vacant post of Row Office Attorney, the following Motion is offered for consideration:

MOTION:     I move to appoint Attorney Craig T. Eliassen to the post of Row Office
Attorney in and for Kent County, Delaware effective immediately upon the passage of this Motion on this day, May 8, 2018 with said  appointment continuing until such time as a successor is selected and appointed by Levy Court.

is item is scheduled for consideration during the Business Meeting of Tuesday, May 8, 2018 under New Business.  Should  you have any questions or concerns,  please contact me.

Government works for the people, and Delaware’s Freedom of Information Act (FOIA) is how the law ensures the public gets information.

“You should not try to bypass FOIA. … It doesn’t hurt to discuss things in public,” said William Pepper Sr. of Schmittinger & Rodriguez P.A., a native Sussex Countian and longtime attorney for various local Delaware governments.

Pepper was asked to review FOIA law for the Fenwick Island Town Council on Aug. 30. Council members Vicki Carmean, Julie Lee and Roy Williams had requested the meeting in July, hoping it would be scheduled before the August Board of Adjustment hearing, which stemmed from the Town’s Building Committee issuing a decision without public meetings.

Although the Building Committee members have for decades individually reviewed and made recommendations to the Town’s building official, without public meetings, now that the process has raised questions about transparency, the Town Council may consider disbanding the committee and simply assigning the building official to review all building permits, as is done in many neighboring towns.

Pepper’s role was to educate, not to offer opinions on the specific situation. He started by reviewing definitions, including “meeting,” a “formal or informal gathering of a quorum of the members of any public body for the purpose of discussing or taking action on public business.” Pepper said Delaware courts had warned about “serial meetings,” where a chairperson meets with a few members at a time to discuss the same business, which could circumvent the quorum element of FOIA requirements.

There are a number of reasons why public boards can hold private meetings, or “executive sessions.” But Pepper reminded Fenwick officials that theirs is a public body, and all votes must occur in public.

“My default is that any meeting is open to the public. … Discussion of personnel is not a talisman. You can’t wave it and then suddenly the meeting closes. There are specific sections for personnel discussions to be held in private,” Pepper said.

The same goes for discussion of legal issues, which only closes a meeting when a public session would have an adverse effect on collective bargaining or potential litigation. Getting a lawyer’s opinion doesn’t automatically count as fodder for a closed executive session, either, Pepper opined.

Meeting minutes can likewise be vague, although they must record those present and all votes or actions. But details can help future councils understand why decisions were made, Pepper said. He said Fenwick includes more detail in its minutes than is required, but said he would like more information on department/committee reports.

Town councils cannot hold meetings outside of town limits, but Pepper made an allowance for circumstances such as the Aug. 23 Board of Adjustment hearing, which was moved to the Roxana fire hall in anticipation of more people attending than Fenwick Island Town Hall could hold.

“You have to move it some place that will hold” that many people, he said, and prior notice should be given.

Who gets attorney-client privilege?

Williams asked who is really an attorney’s client: the individual council members or the Town?

“In our case, we must go through the mayor to request to speak to an attorney,” Williams said.

“Your solicitor represents the Town of Fenwick Island. The Town is governed by the council, so your solicitor doesn’t represent each one of you. But to control attorney’s fees, it’s usually a good idea that not everyone can contact the solicitor. So that’s something you have to work out among yourselves,” Pepper said.

Also, he said, “generally” every council member should be allowed to read a town solicitor’s opinion, in their role as council members — but that’s also case-by-case. He warned against distributing such an opinion broadly, because once it’s declassified, it’s no longer privileged information. A solicitor should also explain why particular information is limited to certain council members.

“It’s no secret that three of us were very unhappy about an ordinance that was longstanding in this community being reversed, which we saw in secret,” Carmean said. “I am not against replacing the Sands — I am all for it. I just want it done in public. I believe in transparent government. I am adamant about it.”

She insisted upon the Town discussing issues together, because secrets lead to misunderstanding, she said.

“What I was not happy about was that there was a long conversation that went on over two months with emails, and I didn’t know, and a decision was made before I even had a chance to give any input,” Carmean said.

“I’m not sure why you have a building committee. Issuing building permits is a ministerial act, and his or her decision can be appealed to the Board of Adjustment,” Pepper said.

Some 20 years ago, the three-person advisory group was called a committee, but Mayor Gene Langan agreed that most towns don’t have something like that. The Charter & Ordinance Committee will review the issue.

It’s also not customer-friendly for an applicant to have to wait for a whole committee to meet publicly, just to obtain permits.

Pepper refused to dig too deeply into the specifics of recent situations, but he said it’s not uncommon for planning or building officials to get legal advice from the town solicitor. That prevents mistakes later, he said.

He also encouraged public bodies to use their lawyers to make sure policies are written well the first time.

Pepper also reviewed for the council members various types of government, such as council-manager, where everyone has voice; or mayor-council, with more leadership coming from a mayor. In Fenwick, Pepper said, the mayor is a voting member of council, but is also more of a chief executive officer, based on duties delineated in Charter Section 17.

The Aug. 30 meeting began with some bickering as to whether there should be a public-comments session, which was not written on the agenda, but had been intended. The public was invited to speak after the legal presentation.

Pepper said Sussex County towns use variances frequently, but variances should be held to a high standard, such as no other reasonable use for that property.

Carmean asked about the standards for a BOA member to recuse him/herself from voting.

“We had someone recuse for something that happened a few years ago,” she explained.

It’s the same as a council member, Pepper replied.

“Usually, a recusal is required when there is a personal issue in what’s coming before you,” such as financial interest, relatives or the member themselves being impacted by the result.

That can be tricky in a small town with deep roots, Pepper said.

“I’m related to half the people down here,” Pepper joked. “Peppers came in the 1620s and, for the most part, didn’t leave.”

He also warned against public servants discussing topics publically when they will be issuing a court-like decision. Everyday town politics is one thing, he said, but BOAs and occasionally town councils act in a more judgement-type role.

“You cannot take a public position on a matter that is coming before you. … You’re supposed to make a decision based on what’s presented at the hearing,” Pepper said. “So, don’t talk about stuff. You know — coffeeshop chats, people come up to you at church or whatever,” he advised them, just shut it down. “I know what life in a small town is like.”

“It’s always been done this way” isn’t a good enough reason to continue as such, Pepper said. Even laws should be reviewed or rewritten to keep up with the times.

Asked why Town Solicitor Mary Schrider-Fox wasn’t doing the presentation herself, Town Manager Terry Tieman replied, “We believe that you wanted to discuss her qualifications at the end of this, and we believed [Pepper] would be an impartial person to discuss this.”

In a straw poll, Carmean, Lee and Williams shared their preference for seeking new legal representation. However, the majority of the council members said they felt they have received sound legal advice from Schrider-Fox, occasionally backed up by second opinions. Williams suggested they get second opinions on every decision anyway.

“Part of the problem goes back to the legal advice that we have received,” Carmean said of six years and six figures’ worth of discussion on building height. “I feel like the advice that we’ve been given has been negligent. … Lawyer 101 will tell you that when you’re looking on a building. … You’re also talking about the top part. … We all worked hard and diligently” to write ordinances that were clear, she said, but now she felt like any mistakes made in writing those ordinances were being hidden when they later came to light. 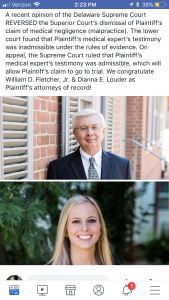 Following his confirmation by the Delaware Senate, Mr. Primos assumed the bench upon his investiture on June 1, 2017.  The attorneys and staff of Schmittinger & Rodriguez join with Noel’s family and others in congratulating him on his nomination and confirmation.

It should be noted that a grandparent or third party’s rights regarding a child are subordinate to a parent’s fundamental right to the care, custody, and control of the child.  The United States Supreme Court has opined that as long as a parent is fit, that parent has a fundamental right to parent and raise the child, and it is fully within the parent’s right to decide if visitation with a grandparent or third party is in the child’s best interest.  This does not mean that hope is lost for a grandparent seeking visitation; rather, the Court gives special weight to a parent’s objection to visitation. The special weight requires petitioning third parties to prove additional factors to obtain visitation with a child.

Many different events, such as divorce, a parent’s death, or termination of a parent’s rights can drastically alter family dynamics affecting the time a child spends with extended family members.  A child should be able to enjoy time with the people who would positively impact that child’s life.  To discuss third party visitation in more detail, or if you have any other family law related issue, please call Schmittinger and Rodriguez at (302) 674-0140 to schedule a consultation.